Joanna is a writer and producer whose work has appeared on NBC, PBS (Emmy Award: Live from Lincoln Center), Fortune, Time, E!, and Food Network. After graduating from NYU and working in series development with VH1 and Al Roker Productions, she founded Wait Don’t Leave in Washington, DC, with the goal of improving the audience experience of live theatre and film, and later moved the company to Los Angeles and expanded efforts to engage under-represented artists.

Joanna’s plays and films have been produced in New York, Los Angeles, and across the United States, and her Oscar-qualified short film Ash is currently in distribution with Network Ireland TV. Her satire, sketches, and standup comedy have been featured by Funny or Die, WhoHaha, The Hill, The Advocate, UCB, and venues across Los Angeles.

A writer herself, Joanna has always been passionate about new work: At 17 in her hometown of Memphis, she started Firstchance Forum – a non-profit theater company focused entirely on developing new plays by teens in and around the Mid-South region. She’s been helping to develop and produce new projects ever since.

As an advocate for new voices in the arts, Joanna has been a guest speaker at the Kennedy Center, director of the Gallatin New Play Series, and an editor of the Literacy Review, which publishes new work by ESL and adult literacy students. For over a decade, she’s written on the topic of forced migration, including refugee rights, immigration policy, and human trafficking, and she loves any opportunity to work with people affected by forced migration as they tell their own stories.

Joanna and her husband now live in Los Angeles with their dog Henry, who graciously lends them space in his apartment. 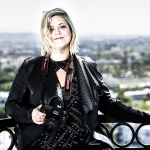 Ashleigh is an Emerson College and UCB alum who has been working as a producer and director for ten years. A proud member of the Producers Guild of America, her work includes shows for Refinery29, Hasbro, Discovery Channel, History Channel, Animal Planet, MTV, and A&E.

Though she has accomplished much in the field of television and media, Ashleigh still claims her most notable job was as Steve Martin’s dog handler. She currently lives in Los Angeles, where she surrounds herself with an overwhelming amount of throw pillows.

Christopher is an actor, writer, and content creator with a degree in dramatic arts from Georgia Southwestern. He moved to Los Angeles to work with Joanna and soon became one of the founding members of UP(st)ART Creative, a communal housing organization for young artists that now spans five properties and hundreds of members across the city, and of Pints & Players, a troupe that performs free Shakespeare in pubs and breweries.

As an actor, Christopher has worked on theatre productions across Los Angeles, appeared on TV shows such as Showtime’s Shameless and Nickelodeon’s Knight Squad, and lent his voice to podcast dramas on PendantAudio.com and animated series on the JelloApocalypse YouTube channel, which boasts nearly 1.5 million subscribers. As a writer, Christopher has worked to develop short films and web series through UP(st)ART Creative and he continually publishes educational content on his own YouTube channel, HarkVlogs.

Christopher enjoys climbing trees, wandering around old bookstores, and gazing fondly at the life-sized chrome velociraptor skeleton that he keeps in his bedroom.